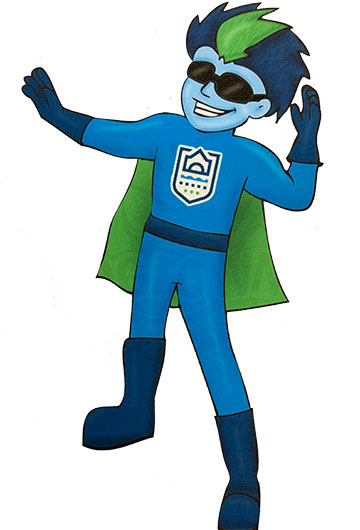 The Greater Fremont Development Council (GFDC) launched a contest on October 14, 2019 to name a new community mascot for the city of Fremont, Nebraska. Over 50 names were entered before the list was narrowed down to the top 10. The top 10 entries were presented for a community-wide vote to narrow it down to five where a small committee of community leaders voted to pick the final name.

The vote to name a mascot for Fremont, Nebraska was held on Facebook. Between 137 Facebook votes & 6 out of the 9 committee votes, "Monty" was the top choice. The name was popular among voters, and Committee Members, some who have been quoted as saying:

“Monty is my number one choice. It's easy to remember, it's short and the name fits the look of the mascot.”

“Makes the most sense and catchy, doesn't need any explanation.”

“What cooler name is there than Monty? Love how it ties in Fremont and is also very fun!”

“I chose Monty as my number one choice because it is such a broad name and is also gender neutral (which is a win) based on whomever is wearing the mascot costume. Yes it is very simple, but sometimes simple is a good thing”

Earlier in 2019, GFDC announced a new community brand, titled ‘Here We Grow.’ As a historically agricultural community that has diversified and expanded its economy, Fremont, Nebraska is the right place to grow a family, and a business. The ‘Here We Grow’ brand symbolizes a community rich in assets and deeply rooted that continues to innovate, try new things and grow together.

As the community grows, GFDC is working on initiatives and programs that bring people and businesses together for the common good. “When each community member is strong, prospering and growing - we are all better off,” said Garry Clark, Executive Director of GFDC. Creating and naming a community mascot is one of the ways GFDC is working to build upon the collaborative nature of Fremont, giving residents a deeper sense of belonging and purpose as everyone works together to continue growing the community.

Look for Monty Around Fremont

Monty is likely to being appearing at community events like groundbreakings, banquets, ribbon cuttings, school events, sporting events and on community tours. When you see Monty, say hello and stop by to see what’s going on. It’s likely that Monty is there to bring awareness to an exciting new development or program, or to build comradery among the community.

Though Monty is for community use, businesses are invited to request Monty to appear for their own promotional use, for a small fee.

Fremont’s Workforce is Capable and Loyal, Generation After Generation

Oct 14 2019
Companies like Jayhawk Boxes have spent decades growing in Fremont, in part, due to a workforce who is capable and loyal. Fremont’s workforce has been a critical factor that has enabled Jayhawk Boxes to grow. Their capabilities and loyalty have been something the company could depend on. Being located i...Continue Reading

Oct 11 2019
Fremont, Nebraska The Greater Fremont Development Council (GFDC) has launched the Welstead Fund (Fund)– a micro loan fund that can be used for façade and interior improvements of buildings located within Fremont, Nebraska. “The Welstead Fund is another way we are supporting Fremont’s small business community, while simultaneously improving th...Continue Reading

Oct 2 2019
WHAT:  A strategic gathering of workforce development stakeholders and business and industry leaders to announce a best-practice framework for community-wide implementation of the National Career Readiness Certificate (NCRC). The collaborative effort will make Dodge County the second Nebraska county (after Douglas County certified in 2018) to be named an AC...Continue Reading
Tags: News, Newspaper, Radio, Communication, Articles