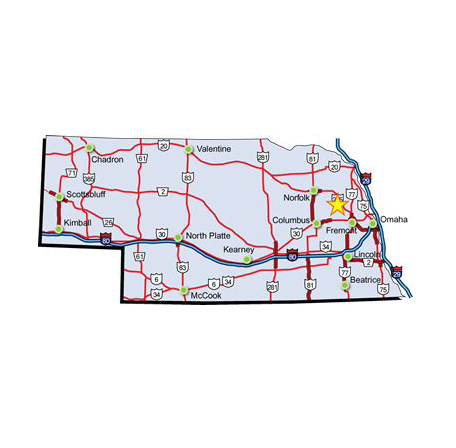 Get all your information about Dodge, Nebraska by visiting these two websites:

Today, Dodge is a small thriving community that receives many compliments on its neat appearance and friendliness.  It is a place where neighbors form friendships and children can safely ride their bikes or walk anywhere in town.  Dodge is a great place to live, work and raise a family.

Find out the top ten reasons for visiting Dodge and more by going to their websites at http://www.ci.dodge.ne.us/.  and   http://www.dodgene.org. 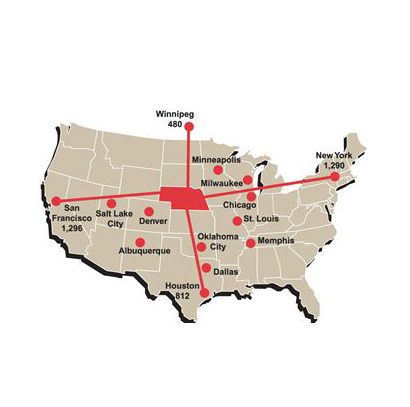 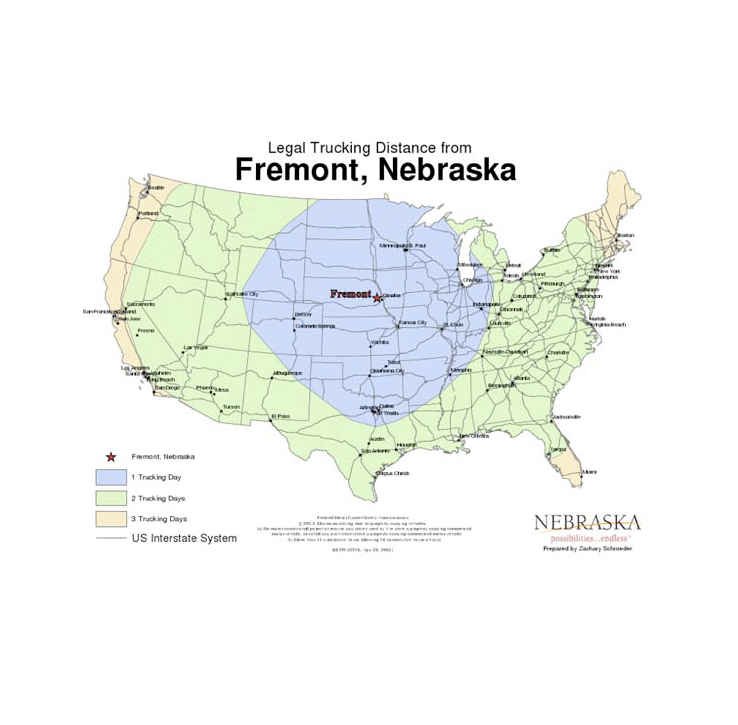 More than 13,500 licensed motor carriers with worldwide connections are based in Nebraska and serve businesses throughout North America.

Transit Time for Carload or Truckload Lots to:

The Fremont Municipal Airport, 35 miles southeast of Dodge, has a 5,500 foot lighted, hard-surfaced runway and a 2,295 foot hard-surfaced runway. Other facilities include hangars and maintenance. The Omaha Eppley Airfield, 75 miles southeast of Dodge, and the Sioux Gateway Airport at Sioux City, Iowa, 73 miles northeast, are the nearest major hubs for air transportation.

The nearest rail service is located 35 miles away in Fremont, Nebraska. Fremont is stratically located on two Class I railroads which provide railservice. The most direct mid-continental railroad route to the west coast passes through Fremont and on to Los Angeles and San Francisco California. Both piggyback and container services are available in Omaha, Nebraska, 75 miles southeast of Dodge. The Union Pacific ramp is located on 8th and Mason Street in Omaha and the Burlington Northern Santa Fe ramp is located in south Omaha at the Gibson Yard. Each of these ramps maintain lift on and lift off TOFC/COFC capabilities, as well as providing pick up and delivery services.

The municipal water system in Dodge is supplied by 2 wells, having an average depth of 86 feet. The wells have a combined pumping capacity of 590 gallons per minute and the system's overhead storage is 50,000 gallons. The average daily demand is 60,000 gallons. The system has a maximum capacity of 899,600 gallons per day. The static pressure is 55 pounds and the residual pressure is 50 pounds per square inch.